In 2015, artist Stéphane Blanquet opted to weave his images for the first time. His expressive visions were translated into seven tapestries, using silk, wool, mohair, cotton and Lurex.

Cuirs de l’Aurore à Demi-Feutré is the fifth tapestry in a series of 40, known as Les Drames Satyriques or Satyr Plays. Blanquet expects to complete the series in 2022. The first seven tapestries were shown in the solo exhibition ‘Goudron Pressage – Sillon Tympan’ in the Centre Georges Pompidou in 2016.

Besides the tapestries, the exhibition also featured installations, lithography prints and drawings that offered an insight into Blanquet’s imaginative and mysterious universe, inspired by popular culture, comics and film. The exhibition also included interactive elements: visitors could play unusual instruments or make their own ‘Blanquet’ artwork.

The colours were only determined during the development phase. The tapestry is woven from a combination of very thick and very thin threads. To ensure balance, it was important to find the right ratio between two. To give the image additional depth and relief, the red frame and black background were woven into the tapestry.

Blanquet (Paris, 1973) is a prolific multimedia artist based in Paris. From graphic novels to animation and sculpture, his images are unique, evoking a lurid world of bizarre creatures and scenes, often referencing artists such as Marcel Duchamp, Isidore Isou, Jean Tinguely, Jean Dubuffet and the Dada movement. His work is regularly exhibited. Past exhibitions include the Hayward Gallery in London, the Musée des Arts Décoratifs in Paris, the Marianna Kistler Beach Museum of Art in Manhattan and the Singapore Art Museum. 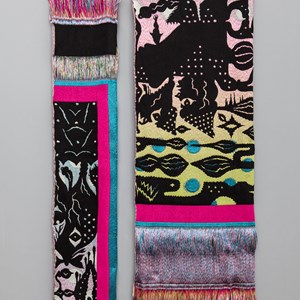